You are here: Home / tribute / Carlotta – Live and Intimate 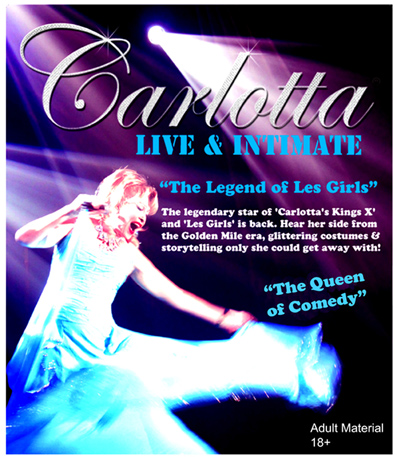 Carlotta’s new show “Carlotta – Live & Intimate” has been selling out at all venues which is testimony to her popularity. With the massive success of the TV Show “Underbelly”, you will hear Carlotta’s side from “The Golden Mile era” with glittering costumes & story telling only she can get away with! You will enjoy a night of full on comedy on real stories of the Underbelly era at Kings Cross.

This production is enhanced with a projector & screen showing amazing video footage of Carlotta’s life from the early days of Kings Cross up until current time collated from footage supplied by ABC, Channel 7 & Channel 9.