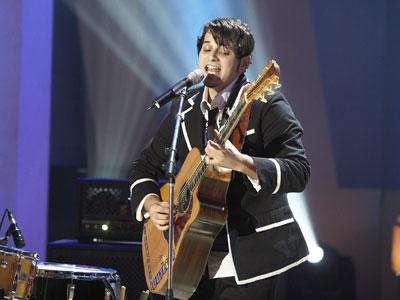 JAY PARRINO – ONE MAN BAND as seen on Australia’s Got Talent. He’s the best new act on the scene plain and simple!

Over the past 10 years Jay Parrino has established himself as one of Australia’s most promising and hardest working musicians.

As a finalist on Channel 7’s Australia’s Got Talent, Jay P wowed audiences and judges alike with his virtuosic guitar playing and powerful vocals.  His charm and cheeky charisma made him a popular favourite with the 2 million odd viewers of the show, and his performances on youtube have now attracted over 6 million hits and counting!

Now he’s a highly sought after performer in the live circuit, playing 4 to 7 nights a week, every week, entertaining at clubs, pubs, hotels, functions, and corporate events for clients such as “Kellogs”, “Optus”, “Boost Juice”, “Device Technologies”,  “McDonalds”, “Richardson & Wrench” , “Thredbo”,  “Perisher” and even a spectacular performance at 2012’s NRL grand final.