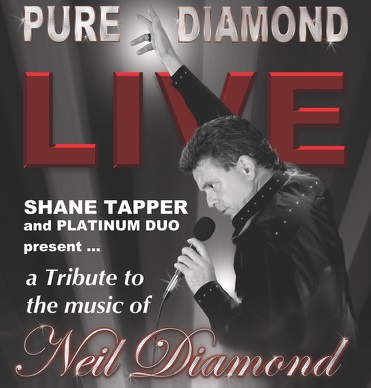 Pure Diamond Live – a tribute to the life and music of Neil Diamond. This is not an impersonation, rather a Tribute to the immense talent of this songwriting genius. Close your eyes, and listen to the voice of Shane Tapper – you’ll swear you are listening to the man himself. Shane will take you on a musical voyage from Diamond’s early days as a songwriter with Bang Records in New York City in the mid 60’s, to his hit songs as a solo artist in L.A. All the hits from Neil Diamonds self titled albums, to Hot August Night and the Jazz Singer in the late 70’s. This Show will have you singing along and dancing in the aisles to the songs that formed the tapestry of our lives.